Radha Madhav Dham receives its inspiration from Jagadguru Shree Kripalu Ji Maharaj, who is widely acknowledged as the foremost authority on Bhakti (the path of devotion to God) at the present time. 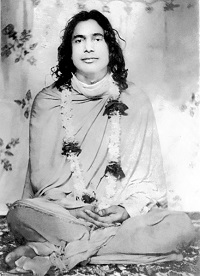 Shree Maharaj Ji, as he is lovingly called, was born in a small village of Mangarh, near the holy city Prayag (Allahabad, India) in 1922.

In order to benefit those souls desiring God’s love, Jagadguru Shri Kripalu Ji Maharaj founded an Ashram in Mangarh in 1966.  Over the years, the ashram has steadily expanded to accommodate thousands of devotees who come to experience the extraordinary devotional atmosphere. Today, this once unknown and quiet village has become a pilgrimage destination.  Mangarh now adorns a spectacular temple called Bhakti Mandir with beautiful dieties of Radha Krishna and Sita Ram, and a massive meditation hall called Bhakti Bhavan – an architectural wonder with an area of 90,000 square foot, able to accommodate 10,000 devotees at a time.

Proclaimed Jagadguru at a Young Age

Exhibiting mastery over the most advanced subjects at a very young age, Jagadguru Kripalu Ji Maharaj completed his education by the age of 16.  By the mid-1950s, fame of his unparalleled knowledge spread far and wide across India and inspired Kashi Vidvat Parishat, an exclusive body of 500 most revered Vedic scholars, to invite him to Kashi to deliver a series of discourses.  His discourses in fluent Vedic Sanskrit left all of the scholars speechless.  With profound admiration, the scholars accepted Jagadguru Kripalu Ji Maharaj’s knowledge to be deeper than the knowledge of all of them combined.  The scholars unanimously proclaimed him as Jagadguruttam – the supreme Jagadguru of this age.  After Jagadguru Shree Shankaracharya, Ramanujacharya, Nimbarkacharya and Madhavacharya, Jagadguru Shree Kripalu Ji Maharaj is the fifth original Jagadguru.

The Legacy Left Behind By Jagadguru Kripalu Ji Maharaj

Through countless lectures, Jagadguru Kripalu Ji Maharaj  has explained the most complex teachings of Hindu scriptures in a simple, practical manner that can be understood by people of all ages and backgrounds.   He emphasizes roopdhyan (actively engaging the mind while meditating on the form, virtues and Divine actions of God) to be the most important part of any form of Bhakti and considers Bhakti without roopdhyan lifeless.

To help one easily engross his mind in God, he has revealed a sea of devotional material including Prem Ras Siddhant, an exemplary masterpiece that references hundreds of Hindu scriptures and establishes Bhakti as the easiest and the surest path to God; 1,008 original pads (devotional songs) that surpass the writings of great Saints and reveal both the breadth and depth of Braj Ras, the highest form of Divine bliss; and thousands of other Radha Krishna bhajans and kirtans.

Read our special edition of eNewsletter- Remembering Jagadguru Shree Kripalu Ji Maharaj, since his ascension to the divine abode.

Watch Kripalu Ji Maharaj’s lectures on Television In the US

Jagadguru Shree Kripaluji Maharaj’s discourses are aired daily on US Television.  Shree Maharajji’s discourses dispel spiritual confusions, elucidate the direct and practical path to God, and transform the lives of the listeners. His spiritual teaching clarifies the purpose of life, details the path of bhakti yoga, and outlines the essence of Hindu religion.