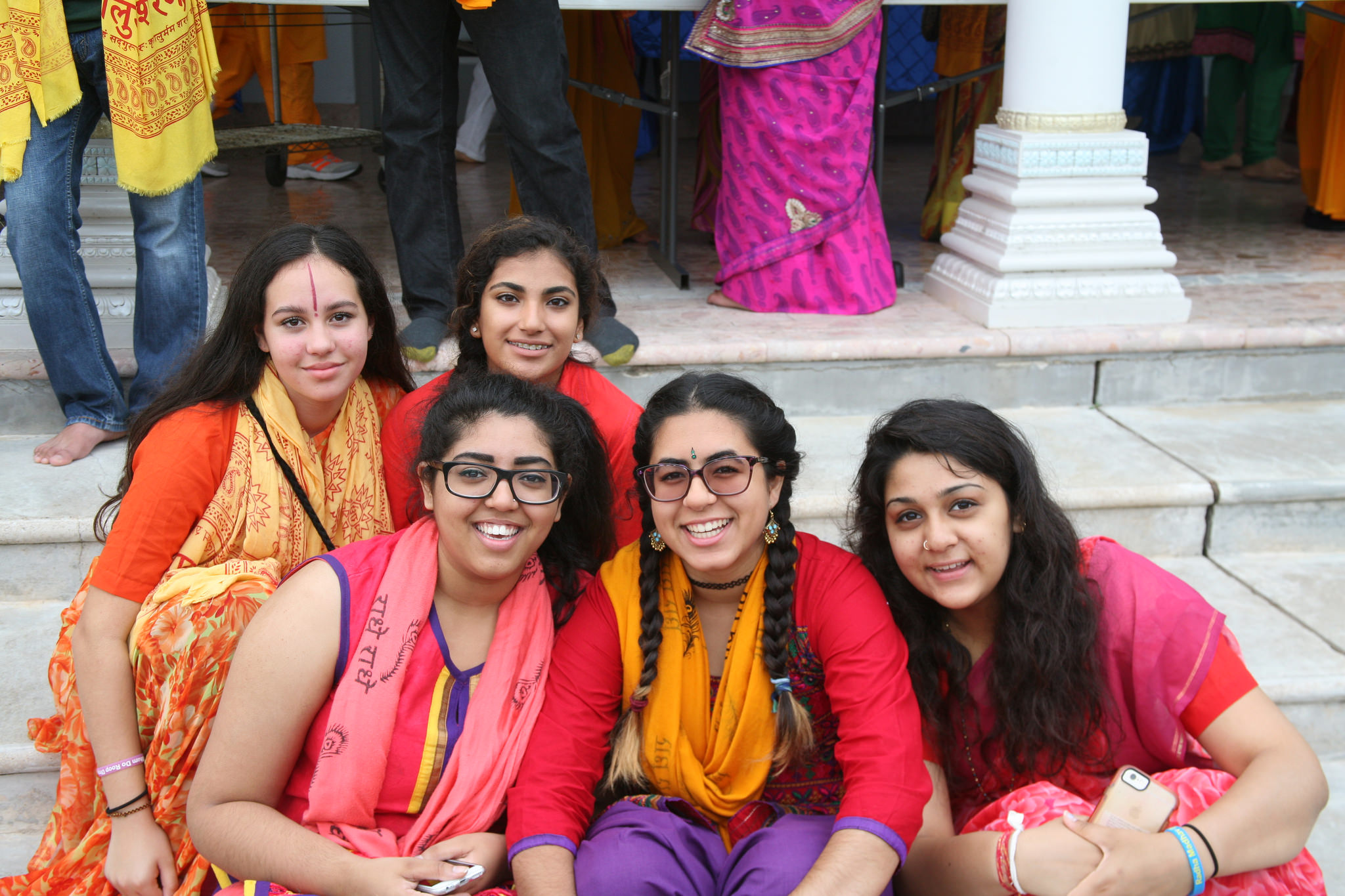 A few weeks ago, I sat down with one of Radha Madhav Dham’s youth leaders for a quick chat. Mallika is a talented dancer, photographer and artist, who often volunteers her time at the ashram during major celebrations and spiritual retreats. She’s about to begin her second year of college, and does a lot of work with South Asian organizations, healthcare programs and student groups.

Vyasar: Hey Mallika, can you tell me what we celebrated today?

Mallika: Today we had Rath Yatra. It started at 8 o clock. We followed a chariot that celebrates Radha Rani. It’s once a year, in July or June, and we do a parade-type-thing all around Radha Madhav Dham. There’s rose petals, and there’s leelas in between, which are like mini-plays and it’s really cool and fun.

V: When was the first time you came to Rath Yatra?

M: I have no idea. I think I came like many years ago for the first time, like 5 years ago.

V: But you’ve been a devotee for a long time?

V: When was the first time you came to RMD?

M: The first time I came was when I was like 6, and we actually started to visit regularly when I was 12.

V: What’s your favorite part about being at RMD?

M: I think it’s like a home to me now, so when I come here it’s like coming home. I think that’s my favorite part. I see all my good friends and it’s a good break from the chaotic material world.

V: What about that break do you appreciate?

M: I appreciate not having to deal with my normal daily problems, and just getting to focus on my devotion, because that’s really hard to do in my life.

V: What’s your favorite part about being Indian, or being Hindu?

M: I love Indian food, it’s my favorite food. That’s not cause I’m Indian, it’s just really good food. Also, Indian clothes are awesome, aesthetically. Being Hindu, it’s great because I feel like I have answers to a lot of things. I feel like I’m less angry because of that, because I know stuff. It guides me to make decisions in life, like really big decisions. It’s like a moral compass.

V: When you see other people without those answers to difficult questions, how does it affect them?

M: They’re really frustrated. It comes from my close friends who aren’t Hindu. We’ll have deep talks, and I can say, “Well, I can give you the Hindu perspective on that, because we have an answer for that!” I feel that most people don’t have answers to really basic and really deep things. And I feel I have that, and it makes me more complete and whole.

V: Do you feel like you get a lot of struggle when you try to explain things to people?

M: Definitely. I mean, over the years, it has gotten way easier, because of just coming to RMD. You learn a lot of stuff here. But it can get kind of hard to explain to people, especially people who’ve never gone out of their box, or people who aren’t the most open-minded. And being from Texas, it can be a struggle. But I feel like I have definitely made an impact or broken through with some people.

V: So it sounds like you have a pretty strong sense of who you are. Were you always like that? Was there a time where you didn’t know who you were – Indian, American, Hindu or what?

M: I’m always bouncing between identities, because every day I’m just living. It’s a little bit confusing sometimes, especially if it’s checking boxes. Who am I, what am I? But I think that since going to college and having to explain who you are and what you’re about, especially just in the college application, you learn to narrow yourself down, and show, this is who I am. That process, and the process of being an adult helps. You have to be able to explain yourself in a couple of minutes.

V: Your brother went to college before you did. And I’m sure you learned a few things about what he went through, because his college experience was very different from yours.

M: He went to Carnegie Mellon. That school has a lot of Indian people, so he really reconnected with his roots. It was crazy because he came back from his first semester, and he was even better at Hindi. We only spoke Hindi at home, but he spoke Hindi with his friends at college.

V: What is it like at your college, where you don’t have as big of an Indian population?

M: Sometimes, I feel like I can be that token person of color. I feel like I have to be an ambassador for my culture occasionally, which isn’t necessarily a bad thing, but I didn’t sign up for it. It happens. I do appreciate that people will come to me to clarify or learn, but I feel they could also use other resources to do the same things.

V: What are some things you do to stay connected to your roots at school?

M: Well, there is an organization on campus called Mosaic, it’s like a South Asian group. And they celebrate Diwali and Holi, which I participated in and was awesome. Also, just coming back to RMD is a good way to connect for me.

V: For the other Indians at your school, do you see them as being less involved or more involved?

M: I would say half and half. Some are very, very involved, and others will just show up. It depends on your schedule, and your commitment.

V: Why do you think that is, aside from schedules and commitment?

M: Sometimes it comes from just rejecting your own culture. Which is something I’ve been through as well. From elementary through almost halfway through high school, I was disassociating myself from Indian culture. I’d go to festivals, but only with family. I wouldn’t tell my friends, or wear Indian clothes. I just shut it out. And one day, in sophomore or junior year, I asked myself what I was doing. I just started again, to be more involved and to appreciate more. I felt like I missed out on a big portion of my childhood. I don’t think it stems from me, though. I think it comes from coming from such a not-Indian culture. The whole thing is understandable, but I’m glad I came around.