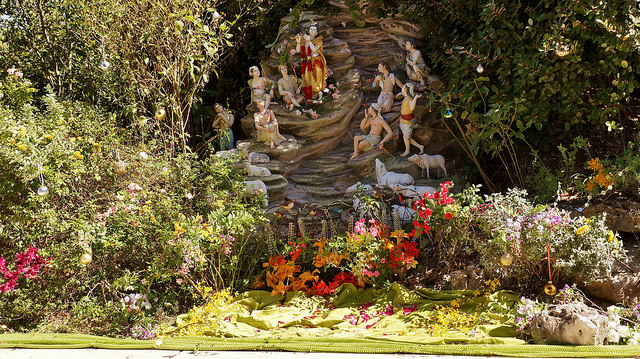 Timing of the Event

On this day, more than 56 dishes are prepared for offering Giriraj Maharaj. There will be kirtans glorifying Giriraj Maharaj in the Temple, along with a discourse and arti. Following the arti, there will be parikrama of Govardhan Hill. As we do parikrama from the Temple steps, we’ll sing bhajans and pads celebrating the greatness of Govardhan Hill and Shree Krishna’s pastimes with His Gwalbal friends. While showering flowers on Govardhan Hill, arti will be performed, after which we’ll sing a lively bhog as we offer Him a delicious meal of foods and sweets. Lunch prasad will be enjoyed by all those present. Bring your entire family to enjoy this lively celebration.

When Indra saw that the Brajwasis had been convinced by a “little boy” to stop worshiping Him, his pride was hurt and he wanted to assert his power (Krishna was 7 years old at the time of this leela). He made it rain torrentially for 7 days. In order to protect the Brajwasis from the downpour, Krishna lifted Govardhan hill on the little finger of His left hand and everyone took shelter under the mountain with Krishna. They all felt lucky to spend this time in close association with Krishna, and none of them felt hungry or tired. In the end, Indra realized that his power was nothing compared to Krishna, because Krishna is supreme God and Indra is only a celestial god who receives his power from Shree Krishna. To see the joyful reenactment of the this Govardhan Pooja, watch these highlights of a past celebration at Radha Madhav Dham.